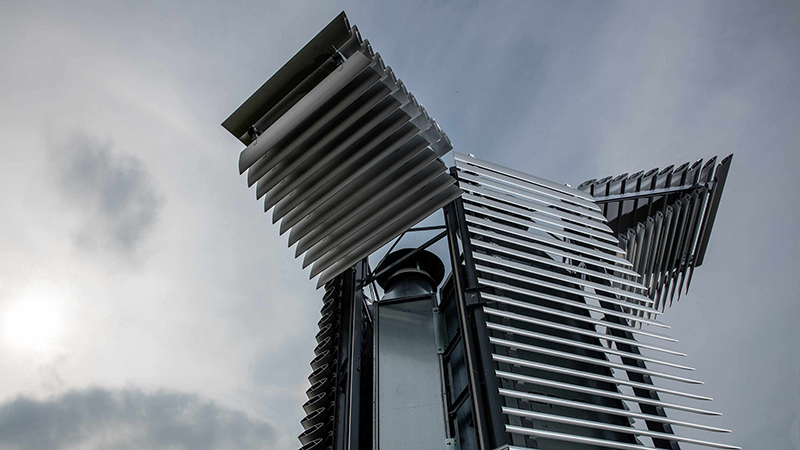 A 7-m structure that acts as a giant air purifier has been set up in Beijing’s 798 arts district. The result of a collaboration between Dutch artist Dan Roosegaarde, Delft Technology University and Dutch green tech company, European Nona Solutions, the Smog Free Tower cleans nearly 30,000 cu m of air hourly and creates a pocket of purified air in its vicinity.

The vacuum-like innovation utilises ion technology to absorb approximately 75 percent of particulate matter with sizes of 2.5 and 10 micrometers, without producing any ozone. Running on less than 1,400 W of electricity – equivalent to the amount needed to power a water boiler – the tower offers a respite from harmful levels of pollution in a city where clean air is very much a scarce resource.

Although the smog free tower was first opened in Rotterdam, the Netherlands, in September last year, Mr Roosegaarde had always intended for the tower to be implemented in China. While in Beijing several years back, he was struck by the city’s high pollution levels; it was the thick blanket of smog obstructing the view from his hotel room that inspired the idea for the air-purifying structure.

“I want to start a movement, a community, which does not accept pollution anymore. We should use the energy of creative thinking to create cities where ultimately in 10-15 years, these beauties are not necessary anymore,” said Mr Roosegaarde, while referring to his smog free tower.

Backed by China’s Ministry of Environmental Protection to take the Smog Free Project across the country, Mr Roosegaarde is looking to bring his towers to four more cities, including the central city of Hebei and the southern commercial centre of Shenzhen. The governmental support comes amidst increased efforts at combating pollution, a key concern that was highlighted in China’s 13th Five-Year Plan released last March.

According to the World Health Organization (WHO), a number of Chinese cities currently lead the air pollution standings. In tracking cities’ smog levels, the WHO ranked Xingtai as the city with the eighth worst air contamination in the world and identified seven other Chinese cities in the top 50. Findings from the International Energy Agency show that air pollution is linked to the early deaths of an estimated 6.5 million people annually worldwide.

Mr Roosegaarde is no stranger to coming up with designs that are geared towards building more sustainable and liveable cities, especially through the smart use of energy. His previous projects in the Netherlands include the Smart Highway and the Van Gogh-Roosegaarde bicycle path. In both instances, phosphorescent paint is used to coat the roads and bicycle lane, allowing them to absorb sunlight in the day, and glow at night.