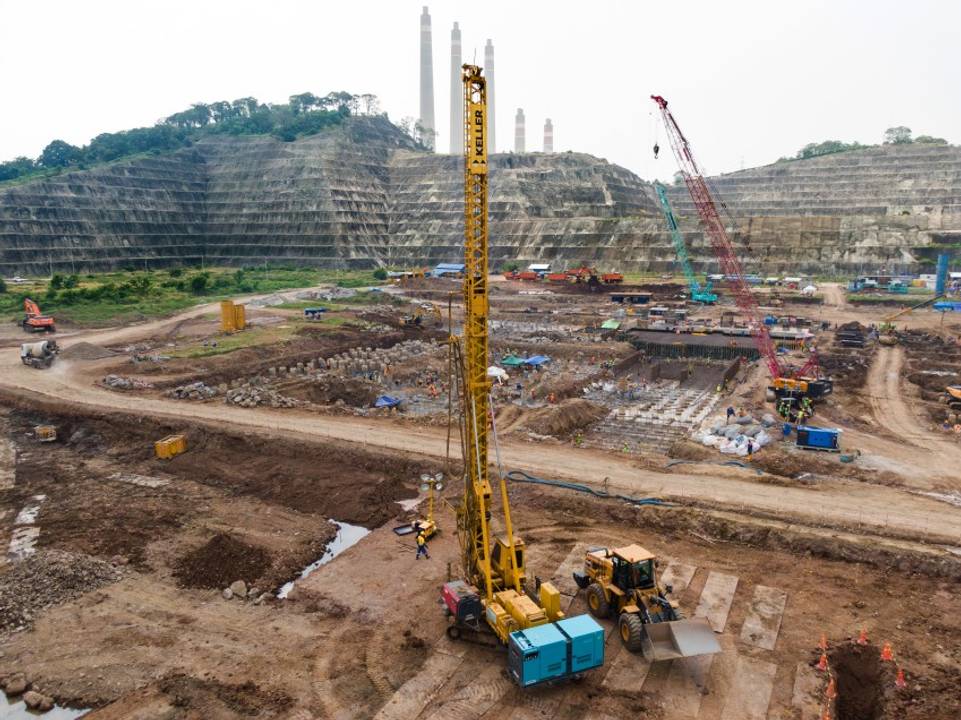 Foundation contractor Keller has been involved in the construction of a power plant in Java, Indonesia. The company is carrying out ground improvement work on the project.

“This is a hugely important and complex project of national importance,” shared Yerikho Purba, Keller’s deputy project manager. “Originally the project was designed for piling, but by offering stone columns as an alternative, we were able to reduce the cost by a quarter and provide greater earthquake mitigation.”

The team is working on this mega project until May 2022, installing 120,000 m of stone columns. “There’s a very hard soil layer that requires pre-boring, but we’re on schedule and, in fact, the client has given us more of the project due to our efficiencies,” said Mr Purba.

Keller has vast experience in high-profile infrastructure projects in Indonesia, having contributed to the 1,000-km-long main Java highway and Jakarta airport upgrade in recent years.

One of the company’s biggest-ever projects in the country was installing foundations for a liquid natural gas plant in a remote area of West Papua. This project required the installation of 6,000 bored piles and 700 corrugated sheet piles. Plus, at the start of last year, the team finished its last heavy foundation project for a major high-speed railway.

“Although the majority of the project was done by a Chinese contractor, we were asked to install bored piles in several difficult sections. There were various challenges such as a restricted site next to the country’s main highway, and complex soil conditions,” explained Yohanes Prakoso, Keller’s senior business development manager.

After many decades of heavy foundation work, Keller in Indonesia made the strategic decision to focus on ground improvement instead. “The market’s changed in Indonesia, with piling projects dominated by cheap Chinese companies,” said Mr Prakoso. “So now we’ve moved into ground improvement, where we feel we have a much stronger competitive advantage.”

In neighbouring Malaysia, Keller is working on a ground improvement project for a large petrochemical plant in the northwestern state of Sarawak. The project team, led by Eric Ting, has recently seen the quantity increase to around 60,000 m of stone columns and 45,000 m of hybrid concrete columns.

As in Indonesia, Keller Malaysia opted for ground improvement techniques due to their economy and performance. “It’s been a fast-tracked project, so we’ve had to plan and resource it very quickly,” explained KJ Tan, Keller’s business development manager. “We’ve had to use local workers, which has meant building a team quickly almost from scratch and training them in the Keller ways of working.

“Projects of this size also require a lot of interaction with the client, subcontractors and suppliers. There are many big projects in this area, so we’re competing to secure the raw materials we need – with some stone aggregates coming from 350 km away. Hybrid concrete column are not that common in this area of the country, so we have to make sure the concrete is correctly batched in order to suit our needs and to maintain high productivity levels.

“Also, the designs are changing all the time, so our design team, led by William Chong, has had to respond quickly. But the great thing is, the client is so pleased with our progress and our quality that we’re seeing them changing some of the scope from piling to ground improvement, giving us more work.”

Another major project secured by Keller in Malaysia is providing ground improvement for a mass rapid transport system, which will significantly upgrade the country’s public transport and generate huge economic benefit. The team worked on the first line between 2012 and 2014 and has been involved in the second for the past five years.

“Keller Malaysia is very proud to be participating in projects that use greener techniques and which make so many people’s lives better,” said Mr Tan. “It’s good to make a difference in the world.”