SOUTHEAST ASIA CONSTRUCTION17 Nov 2021
Pride of Bangladesh: The country’s first underwater tunnel
As this is the first tunnel in the country, SMEC is also training and developing the next generation of Bangladesh’s tunnel engineers. The contractor on the project is China Communications Construction Company Ltd.
SMEC, in a joint venture collaboration, was appointed by the Bangladesh Bridge Authority to supervise the design and construction of the project in 2016, partnering with COWI A/S, ACE Consultants Ltd and DevConsultants Ltd. 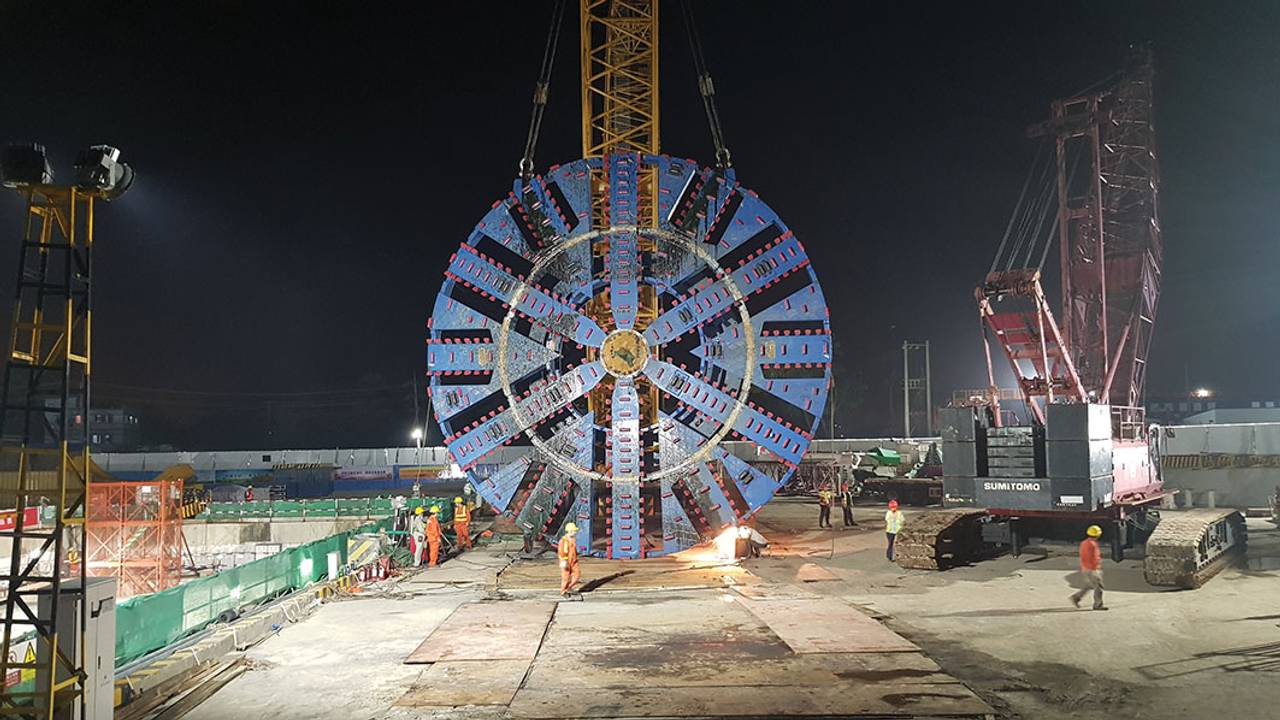 Due to the geology of the site and the requirement to tunnel under a river, the slurry shield method of tunnelling was adopted for the main tunnels with approaches using cut-and-cover method. 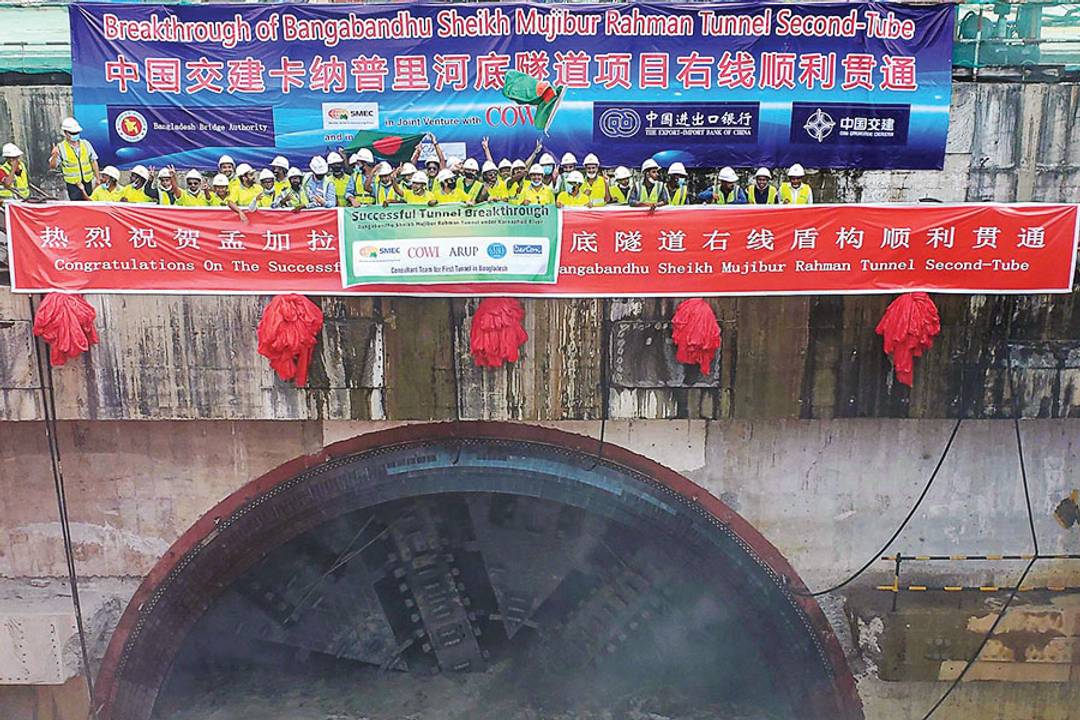 An important milestone was achieved on 7 October 2021, when the TBM successfully broke through at the west bank working shaft of the second tunnel.
This large-scale project includes over 5 km of connecting roads and will be a game changer for southeast Bangladesh, connecting the region to the rest of the country.
BangladeshtunnellingSMECtunnel
Views: 1163

The Bangabandhu Sheikh Mujibur Rahman Tunnel – also known as the Karnaphuli River Tunnel – in the port city of Chattogram (formerly called Chittagong), Bangladesh, features 2.5 km-long, 11-m-diameter twin tunnels under the river and 250-m-long cut-and-cover and open-cut tunnels connecting both ends. When completed, it will be the country’s first underwater tunnel, which is being developed by the Bangladesh Bridge Authority.

The project includes over 5 km of connecting roads and will be a game changer for southeast Bangladesh, connecting the region to the rest of the country. It is also part of China’s One Belt One Road initiative and a key link in planned cross-country transport corridors.

Works began in early 2018. An important milestone was achieved on 7 October 2021, when the tunnel boring machine (TBM) successfully broke through at the west bank working shaft of the second tunnel. The first tunnel was completed on 2 August 2020.

“With the rapid development of southeast Bangladesh, especially in the regions south of Chattogram, the two existing bridges over the Karnaphuli River are inadequate to accommodate the increase in traffic,” explained Gavin Strid, SMEC’s chief technical principal - project management and project manager of the joint venture consultant team. “Having a population of over six million, the heavily congested city of Chattogram is closely surrounded on the east by the Chittagong Hill Tracts and the west by the Bay of Bengal, making an additional bridge type crossing of the Karnaphuli River unviable.”

The solution? “The Bangabandhu Sheikh Mujibur Rahman Tunnel - the first tunnel in Bangladesh.” The name of the tunnel was chosen in honour of the founding father of Bangladesh and the country’s first president.

Mr Strid highlighted that the tunnel is located under a very wide river near to the coast and will traverse varying layers of sand, silt, and clays. “Because of the geology of the site and the requirement to tunnel under a river, the slurry shield method of tunnelling was adopted. This is a very difficult form of tunnelling exacerbated by the challenging and sometimes risky coastal environment the project is located in.”

The progress of tunnelling was slow, as the slurry shield method brings with it many risks, explained SMEC. The TBM movement and its shield were affected by several factors, including the varying ground conditions, overburden depth, slurry pressure, primary grouting pressure, and over-excavation.

In slurry shield tunnelling, the TBM operators rely totally on instrumentation and sensors to guide the machine. “As the operators are unable to see what they are tunnelling, it requires a lot of experience in judging what is happening at the TBM face. Our consultants worked closely with the contractor to mitigate the risks, leveraging our teams’ significant experience in this specialised form of tunnelling,” said Mr Strid.

“Notwithstanding, both tunnels have been completed despite the ongoing challenges of the Covid-19 pandemic. The breakthrough of the TBM is another huge milestone which we, together with our partners, client, contractor, and all Bangladeshis are very proud of.”

“What makes this project even more meaningful is that we are training and developing Bangladesh’s future tunnel supervision engineers,” shared Mr Strid. “As this is the first tunnel in the country, there is a national skills gap in this area and with more tunnelling projects coming on line, it is important that we upskill the next generation of Bangladeshi tunnel engineers.”

Having been with SMEC for more than 30 years, working across 15 countries, Mr Strid knows too well what it takes to deliver a successful project.

“Anyone who has managed a complex, large-scale project will tell you that success isn’t only about being experienced, it often comes down to how well a diverse group of people communicate and work together towards a common goal. This is even more important when there are different languages and cultures involved. On this project, we have worked together using three languages.

“In addition to our formal communication system, we’ve been taking advantage of apps like WeChat and auto-translation technology to facilitate better communication. Through 24/7 group chats, we are aware of any issues straight away and this has allowed us to always be on the front foot to tackle issues in their infancy.”

Mr Strid mentioned that the project team has also established a strong document management system, so that it can remotely interrogate and access all project data generated including drawings, letters and test data from both Bangladesh and China.

“An interesting aspect of the project procurement is that all the precast concrete tunnel lining segments are made in China and shipped to Bangladesh. We maintained a team in China that ensured the quality of the 20,000, 12-t segments being cast for the project.”

Another innovative development was the establishment of a new tunnel management system, added Mr Strid, which enables the project team to collect, interrogate and analyse all data gathered on site, including the data coming from the TBM. “We can maintain a strong historical record of everything that happens on site and analyse it when required. This information is not only invaluable from a governance viewpoint but is also an important reference for future projects.”

Along with the Chittagong Outer Ring Road and the Dhaka Chattogram Expressway – both of which were designed by SMEC – the Bangabandhu Sheikh Mujibur Rahman Tunnel is poised to be a catalyst for the economic transformation of southeast Bangladesh into an industrial hub. The project is also expected to create major employment opportunities for the region, boosting its economy and ultimately benefitting the whole country.

Note: This article has also been published in the Nov/Dec 2021 issue of Southeast Asia Construction, which includes more images. Click here to read the article.