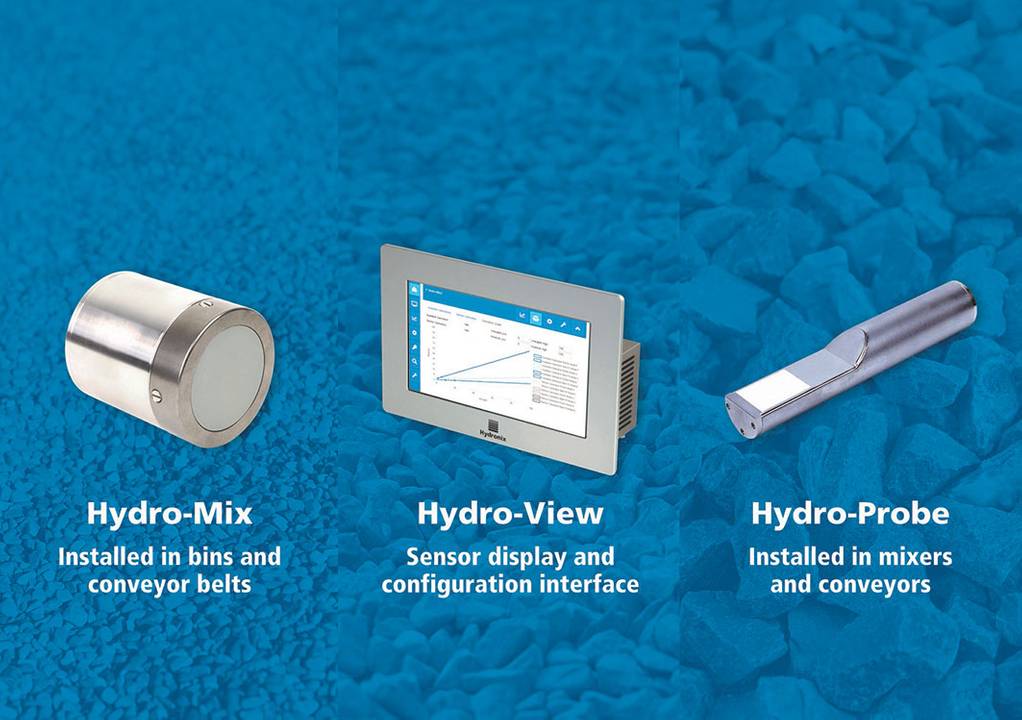 Moisture sensors with microwave technology are ideal for use in concrete production, due to their high accuracy, lack of influence by dust or colour, and the competitive cost-benefit relationship of this type of equipment.
The flush-mounted moisture sensor from Hydronix is designed for use in concrete mixers. It calculates the correct volume of water in the mix to achieve constant water contents, batch after batch.
A Hydronix Hydro-Mix flush-mounted sensor fitted to the floor of a mixer. It allows concrete producers to have full control over the final moisture content before the mix is discharged.
A Hydronix Hydro-Probe moisture sensor installed under an aggregate bin. It ensures that the correct dry weight of each aggregate is loaded into the concrete mixer.
This image shows typical installation positions for a moisture sensor in aggregate bins. Besides improvements in quality, the use of moisture control also leads to improved profitability for a concrete production operation.
concreteHydronixconcrete moisture sensorsmicrowave moisture sensors
Views: 584

The current worldwide health challenges have forced many construction companies to adjust their working practices to minimise the staff involved in a site whilst still managing full production schedules. With automation being one of the critical components in this effort, a global manufacturer of microwave moisture measurement sensors, Hydronix, explains the importance of using automated systems to improve efficiency in concrete production.

Inconsistency in both ready-mix and precast concrete production is often caused by the varying moisture content of the sand and aggregates. “Water content changes can originate from different parts of the concrete production process with differing effects. These include: natural moisture content variation in aggregates; uncovered material transport or storage systems, which allow increments of water content by rainfall or their reduction by evaporation; and accuracy of the water and admixture dosing systems into the concrete mixer,” explained Hydronix.

“Obviously, the greater the variation of moisture and the greater the weight of aggregate used, the more serious this condition becomes and, as the water content in aggregates can be as high as 16%, this has large repercussions to the economics of trading in this material.”

Many common mix designs have larger proportions of fine materials, so, for best results, Hydronix advised that concrete producers should concentrate on initially measuring moisture in the sand and coarse stone materials for the biggest return on investment.

Today, there are numerous products available in the market that allow the measurement of the moisture content of aggregates and fresh concrete with a good degree of accuracy.

“The microwave technique has emerged as the most suitable for the measurement of moisture in concrete production,” said Hydronix. “Microwave technology is superior mainly due to its high accuracy (usually in the range of +-0.2% depending on the quality of the calibration), its lack of influence by dust or colour, and the competitive cost-benefit relationship of this type of equipment.”

In ready-mix concrete, varying moisture content affects the yield achieved for a given amount of cement, the slump and the strength of the concrete produced. Thus, a modern ready-mix plant usually has microwave moisture sensors installed at the gates of each of the aggregate bins, revealed Hydronix.

“Once the sensor has been set up correctly, average moisture readings can be taken in real-time during each batch and used by the control system to adjust the dosing targets of the aggregates.

“The sensor enables the system to ensure that the correct dry weight of each aggregate is loaded into the mixer.

“At the end of the aggregate loading, the total water in the material can be calculated from the moistures recorded during the batching. This calculation is then used to also reduce the water added into the mixer to get the correct final water/cement ratio.”

The company added that a plant producing 160 cu m/day of concrete would see a typical payback period for moisture measurement equipment of three months, gaining considerable benefits in both increased yield and improved quality.

“High-quality materials and well-controlled moisture levels are critical for precast and concrete product manufacturers to ensure consistent products. Significant savings in cement, colour, and admixtures, including reductions in the number of wasted batches, are all common benefits of moisture measurement.”

In addition to installing aggregate bin moisture sensors at their plants, precast and concrete product manufacturers can also use moisture control in the mixer to ensure the correct total water in the mix, batch after batch.

“Measuring the moisture of fresh concrete in a mixer allows the concrete producer to have full control over the final moisture content before the mix is discharged,” said Hydronix. “This also ensures that variations such as unmeasured aggregates, or environmental influences (rain or evaporation from heat) during transport from the hopper to the mixer, are eliminated.”

There are normally two sensor options for measuring moisture in concrete mixers: a flush-mounted sensor, which is fitted to the floor of a pan mixer or the belly or end wall of a shaft mixer; and an ‘in-mix’ sensor, which either mounts on the mixer scraper arm in a static pan mixer, or is mounted statically in a rotating pan mixer.

The measurements from these moisture sensors are used to calculate the correct volume of water required to achieve constant water contents inside the mixer, batch after batch.

According to Hydronix, its latest version of the ‘in-mix’ sensor, the Hydro-Probe Orbiter, features a fully ceramic sensing head unit to offer producers the fastest response available in the market.

Measuring moisture to indicate the degree of homogeneity in a concrete mixer – at any mixing stage – is also possible, which can be carried out using microwave mixer sensors.

“When the raw materials are loaded into the mixer, the sensor can record the moisture variation between the wet aggregates and the dry cementitious materials. As the materials mix with the dosed water and admixtures, the moisture signal changes as the material moves in the mixer,” explained Hydronix.

”As the water disperses evenly over the entire mix, the trace output from the mixer sensor flattens, indicating that homogeneity has been reached.”

The company emphasised that the use of homogeneity control allows the optimisation of mix cycles. “Once the producer can evaluate whether the mix is homogenous or not, they can then adjust the mixing time to ensure that only the time required to homogenise the mix is used. Mixing for the right amount of time has considerable benefits in reduced power consumption, reduced wear of parts, and increased production output.”

Hydronix further highlighted that besides improvements in quality, the use of moisture control also leads to improved profitability for a concrete production operation.

“Concrete producers will reduce material costs and increase production yield. Although more difficult to quantify, the reduced number of sub-standard batches, reduced wear parts and energy savings contribute towards increased profitability. The improvement is such that over the past 30 years, many Hydronix customers have determined a return-on-investment period of between three and six months for the moisture control system.”