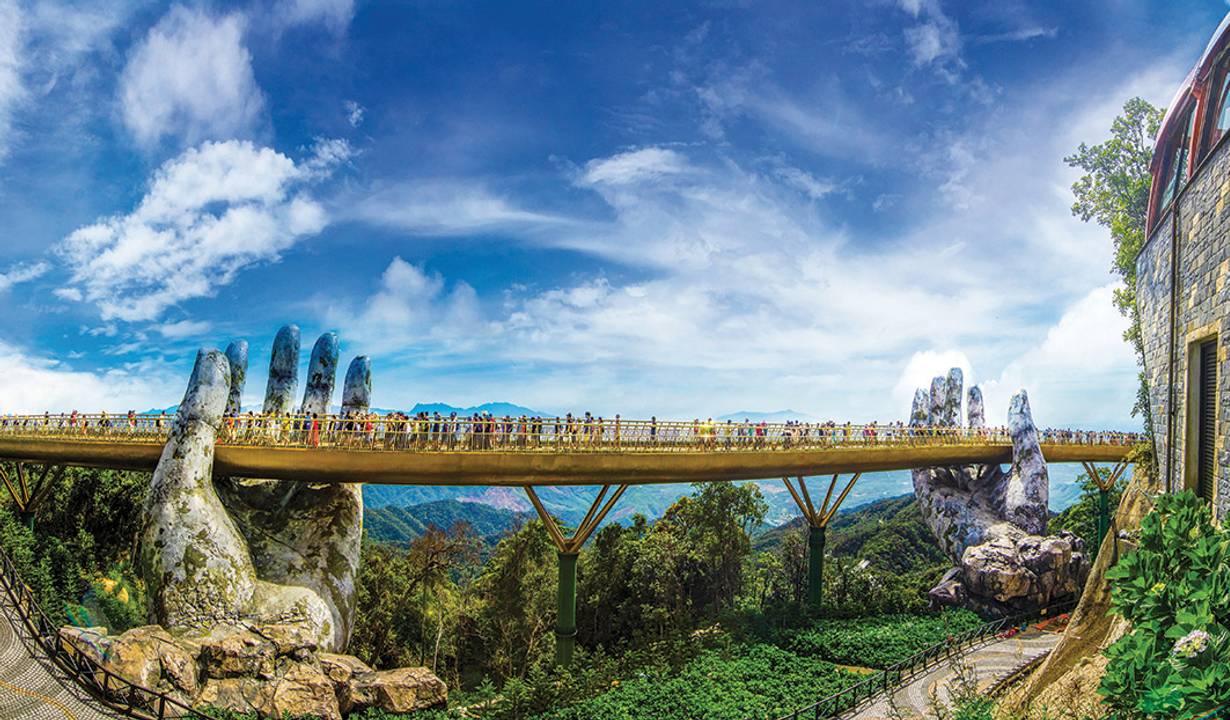 The Golden Bridge has eight arches, with the longest being 21.2 m. Construction work on the project took about a year, during which it faced many problems due to its location in the forest and mountainous areas, where access was limited.
Ready-mixed concrete was used for the piles and foundation of the bridge. Mapei’s Dynamon SR2 VN admixture ensured the required mechanical strengths to support the weight of the bridge, even if it was cast at high temperatures.
VietnambridgeconcreteMapeiconcrete admixture
Views: 390

The Golden Bridge is one of Vietnam’s latest iconic landmarks, set amidst the magnificent nature of Ba Na Hills in Da Nang City. It spans 12.8 m wide and 150 m long, featuring two giant hands. Nested on the Paradise Garden, the bridge serves as a transit to take visitors from the mountain foot or French village to Le Jardin D’Amour gardens.

Opened in 2018, the Golden Bridge is owned by Sun Group and was designed by TA Landscape Architecture. It has eight arches, the longest of which measures 21.2 m. The guardrails are covered with gold, hence the name ‘Golden Bridge.’

According to TA Landscape Architecture, the design embodies the hands of the Mountain God drawing from inside a rocky mountain a golden sash to carry villagers to the Paradise Garden, perfectly matching the fantasy and fairy theme of Ba Na Hills.

The giant hands look like they are carved from stone, but they are not. The skeleton of the hands was built with steel meshes and then covered with fibreglass.

Construction of the entire bridge took about a year, during which it faced many problems due to the project’s location in the forest and mountainous areas, where access was limited.

For one, it was impossible to mix concrete on site. In addition, transporting ready-mixed concrete for such a long distance at high temperatures yet maintaining the required mechanical strengths for pillars and foundation to support the bridge’s weight was also a big challenge.

Following site trials, evaluation of product quality and cost effectivity, Mapei Vietnam - the local subsidiary of the Mapei Group - was commissioned to supply concrete admixtures for all pillars and foundation of the bridge.

Mapei provided its Dynamon SR2 VN system (its counterpart on the international market is Dynamon SR2), a superplasticiser based on acrylic polymer for ready-mixed concrete, which is ideal for applications that need strong water reduction, along with relatively high mechanical strength. The product’s performance makes it particularly suitable to carry out casting at high temperatures and when the concrete must be transported over long distances.

Note: The article courtesy of Realta Mapei International no. 83