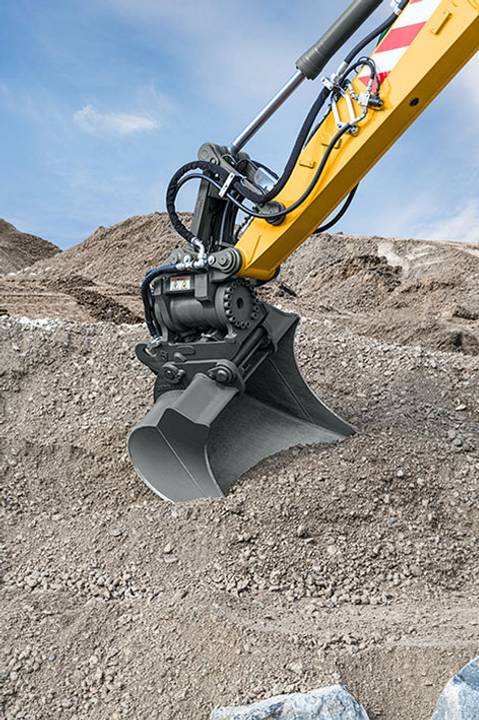 As a direct mounting, the new LiTiU 18 unit is mounted directly to the stick end of the wheeled or crawler excavator, allowing swing angles of up to 2 x 75°. 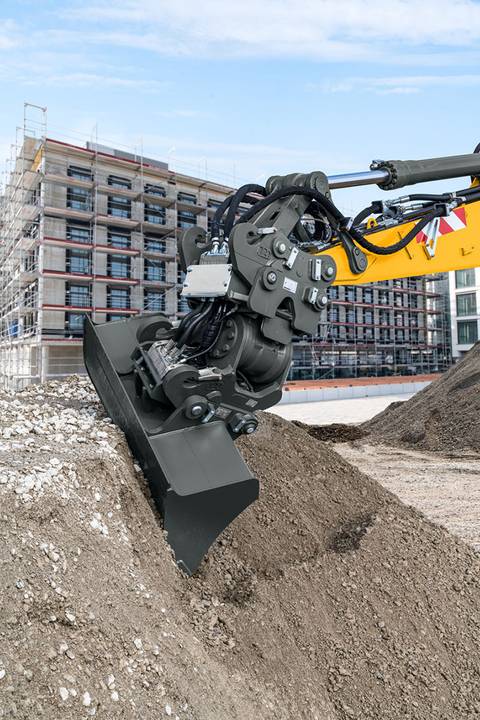 As a sandwich attachment, the connection between stick end and LiTiU, as well as the bottom of the LiTiU and attachment, is realised with a fully automatic quick coupling system. It allows swing angles of up to 2 x 50°.
Liebherrattachmentsearthmoving equipmentexcavator
Views: 107

Liebherr has developed a tilt unit that can extend the swing angle of various excavator attachments. With this new LiTiU tilt unit, fixed attachments are now able to reach swing angles of up to 2 x 75°. In addition, hydraulic attachments such as sorter grabs, swivel-mounted ditch cleaning buckets and tilt buckets can be combined with the LiTiU unit for an even bigger swing angle.

The new LiTiU unit is available in different versions and sizes, and is also compatible with attachments from other manufacturers, said Liebherr.

The LiTiU attachment is designed for applications where the swing angle represents an extension of the working area. It expands the applications of wheeled and crawler excavators. Apart from classic excavation works, the machines can be used for levelling and modelling banks, levelling and ditch cleaning, as well as demolition and recycling, without the need to reposition the machine or change the attachment.

With the optional extended hydraulic circuit, the LiTiU 18 unit can also be activated directly. As a result, the high-pressure and medium-pressure circuits are available for the functions of the attachments. There is no need to change over to the joystick control elements and productivity can be increased, said Liebherr.

As a sandwich attachment, both the connection between stick end and LiTiU and the bottom of the LiTiU and attachment is performed for LiTiU 33 or LiTiU 48 via the fully automatic Liebherr SWA 33 Likufix / SWA 48 Likufix quick coupling system. Here, swing angles of up to 2 x 50° are possible. One advantage of this attachment version is the externally routed hydraulic piping, ensuring a uniform and constant oil flow.

According to Liebherr, there are more benefits when the new LiTiU unit is combined with the fully automatic Likufix quick coupling system (the latter is a hydraulic quick coupler with an automatic hydraulic coupling system). Both mechanical and hydraulic attachments on the bottom of the LiTiU can be safely exchanged from the operator's cab in a short time. Apart from quick and safe attachment changeover, the LiTiU 33 or LiTiU 48 unit can also be set down fully and the machine can be combined with another attachment.

Fixed buckets are mainly used for traditional earthmoving work, for example excavation and transport of various materials. A certain swing angle is beneficial for levelling and modelling banks or levelling and ditch cleaning work, as well as demolition or recycling. With the new LiTiU unit, each fixed attachment becomes a swivel-mounted unit with increased versatility.

Hydraulic attachments can also be combined with the LiTiU unit for an even bigger swing angle, as can attachments from other manufacturers such as vibrating plates or mulchers. Productivity can be increased in the instance where the swing angle provides better access to difficult-to-reach areas without the need to reposition the machine.