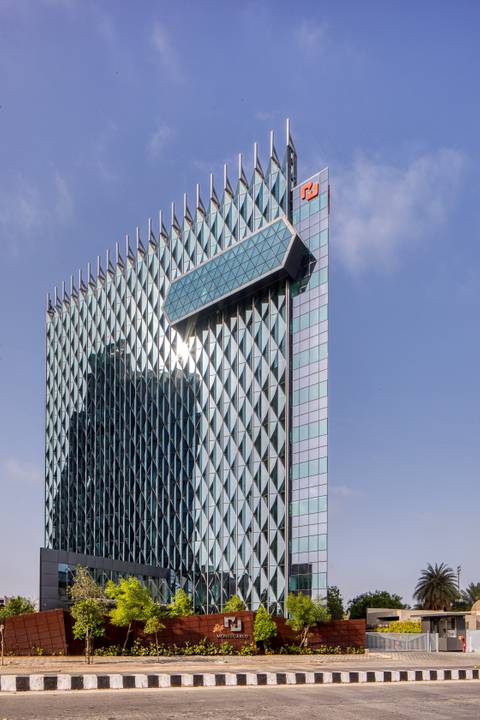 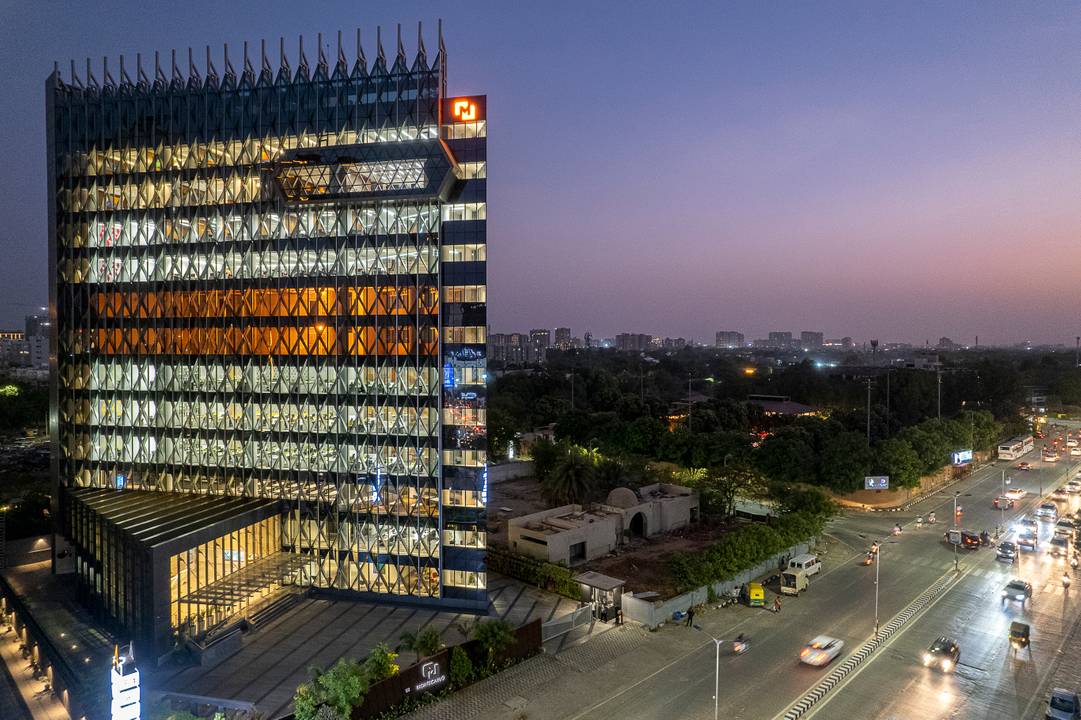 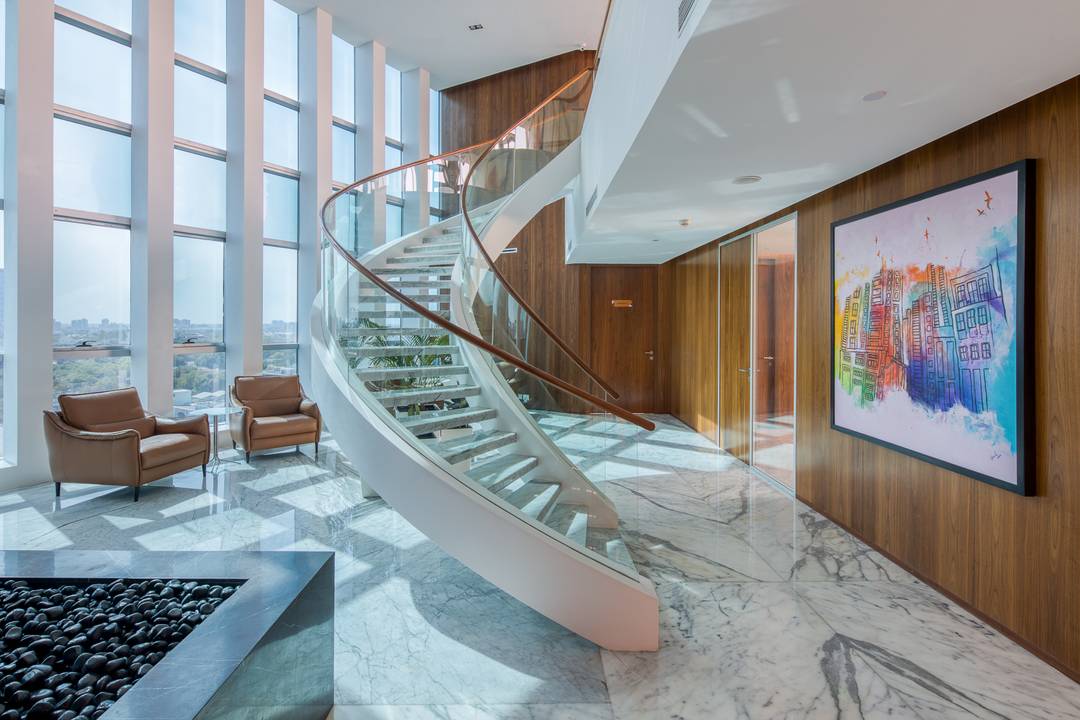 Up to 80 percent of the office space interior is covered by a radiant baffle cooling system. Photographer: Umang Shah 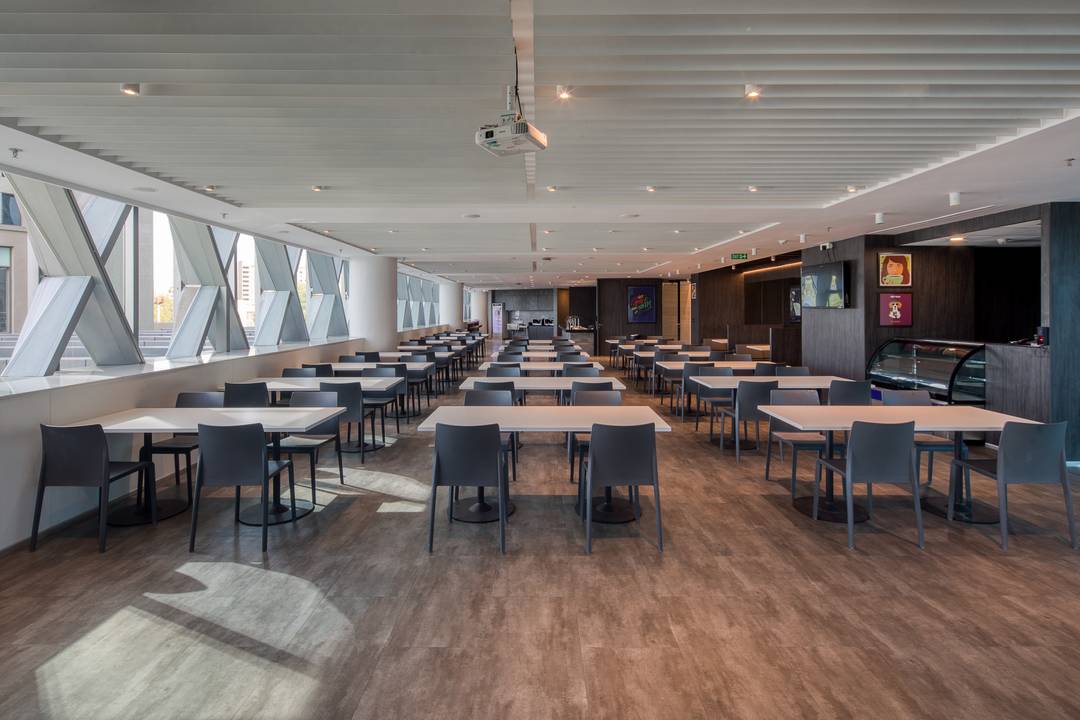 A contemporary reflection of the ethnic and social lineage of Ahmedabad.

Located in Ahmedabad, the cultural and economic centre of Gujarat, the corporate office for Monte Carlo has been designed to embrace the social and ethnic lineage of the city. The striking design of the building encapsulates the essence of the reputed infrastructure company, seamlessly intertwined with the traditionally sensitive design narrative of the city of Ahmedabad. The contemporary structure has been fabricated whilst preserving the intrinsic historic essence of its context.

Spread over a sumptuous area of 0.60 acres, the 38 metres X 61 metres parcel of land served as the site for the project. The site has been strategically located abutting a 36 metres wide road. The conception of the form unveiled through optimising existing site conditions to maintain appropriate road frontage and allow future road widening along the building frontage. The site situated along the East – West axis necessitated climate responsive design interventions and sensitive zoning. The building orientation has been optimised to minimise the permeation of heat gain into the interior spaces. The angular configuration of the building has been tactically conceived to capture vibrant and panoramic exterior views whilst limiting the exposure to glare from the South facade. By screening the Northern and Eastern sides of the building and orienting the primary façade towards Northeast, diffused and glare-free daylight has been manoeuvred into the interior spaces. The form of the building has been perceived as a response to accommodate the prevailing wind pattern of the area as a dynamic design element.

The diverse heritage of the walled city of Ahmedabad has been integrated with the geometrical conception of the form. The city has been envisaged as an amalgamation of various villages, spawning over an area of 464 square kilometres. These villages seem innately interweaved into each other like patchwork in a quilt. The quilted pattern of the façade is a reflection of this vision. The atypical façade has been crafted through triangular tessellations, interpretive of the famous kite-flying festival in the city, Uttarayan. Ahmedabad, once a leading diamond manufacturing hub, served as a prominent diamond cutting centre globally. The fabrication of the peculiar cut-form of the strongest gemstone has been superimposed on the façade, maximising natural light into the building by intricate articulation of every facet of the structure such that every surface on the façade has the potential to change a light ray’s plane of travel. The precise incisions of the glass envelope wrapping the building are a manifestation of the multifaceted diamond form. The robust form of the building, exhibiting a unique glass façade composed of rhomboid fractals, gleaming in its iconic glory, reveals the illusion of the celebrated heritage of the city in a modern assemblage.

The triangulations of the glass façade render the interior spaces with a unique play of light and shadow. The transparent envelope with distinct angular indentations unravels exclusive exterior views from indoor spaces. The vertical zoning of the building has been worked out to incorporate a café on the third floor, office and corporate activity from the fourth to the twelfth floor along with a terrace garden crowning the structure.

An innovative material palette has been conceived for the project. The dead core walls on the South and Southwest have been cladded with solid and perforated aluminium panels. These panels have been designed to project from the facade in a triangulated geometry, creating a sense of texture in the elevation. The interiors have been rendered with natural and earthy textures, evident with the use of stone and wood in the indoor spaces. Biophilia has been induced in the design as a user wellness strategy though the incorporation of indoor plants and green walls in interior spaces. The false ceiling has been designed to contain radiant baffle aluminium fins carrying chilled water to stimulate space cooling.

The design challenge posed by the hot and dry climate of the area has been viewed as an opportunity to seek sustainability and elevate building efficiency in an inclusive design approach by the architects. Efficiently designed external shading devices on the facade prevent intense and harsh heat from entering the interiors. The strategic configuration of the louvers on the elevation obstruct direct solar radiation from permeating into interior spaces through the glazing, thereby reducing heat ingress indoors and ultimately reducing the load on active energy systems. The control of translucency of the shading elements concealed in the façade is manifold, elevating aesthetics, ensuring thermal comfort and augmenting day-lighting requirements. The solid structural cores have been placed facing the South and Southwest to restrain the office floor plate from excessive heat gain.

A glass skylight has been engineered to project out of the double heighted reception lobby, supplying ample natural light into the space while tactfully being shaded by the tower itself. An effective glazing system has been devised to maximise day-light into indoor spaces while regulating heat gain and glare control. Electro-chromic glass, also known as smart glass or electronically switchable glass that automatically changes opacity and tint to control the visible light transmittance and solar heat gain has been employed on the West elevation and the skylight glazing in the reception area. The triangulated three dimensional panels on the North-East facade have been fabricated with high-performance glazing technology that aid in energy efficiency. The technique of radiant baffle cooling has been adopted for almost 80 percent of the office space, facilitating a reduce in energy demand by almost 35 percent if compared to a conventional mechanical cooling system. Sustainability has been evaluated as a comprehensive approach in the project, encompassing various aspects such as systematic site study, methodical zoning, optimised form, building orientation, enhanced glazing technology, dead mass strategy and precise design detailing.

The company’s ethos and vision statement – “To be the leading infrastructure organization admired by all stakeholders with sustainable growth through the process, people and innovation” has been upheld by careful design interventions that elevate the notion of inbuilt sustainability of the iconic structure, dually performing as an energy efficient and cost-effective edifice.