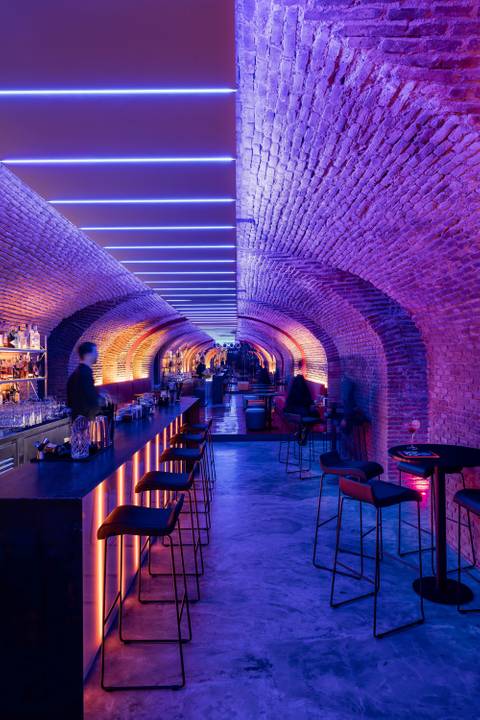 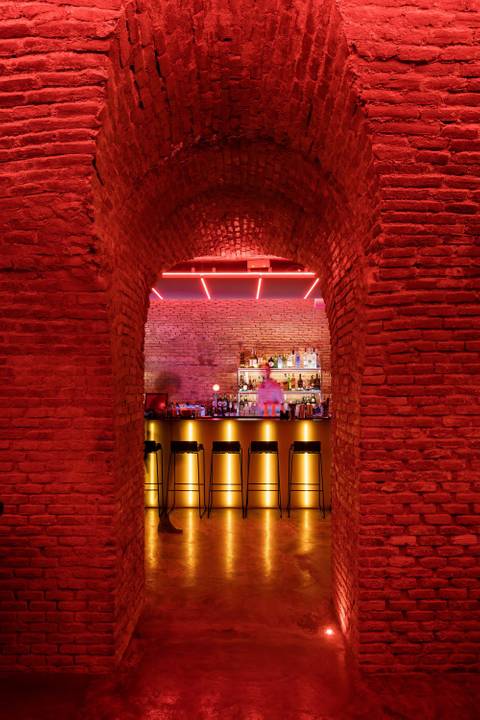 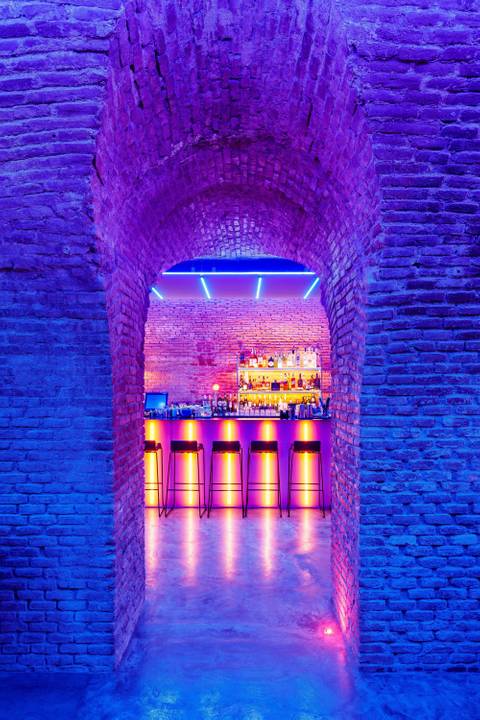 EL EQUIPO CREATIVO had two main design premises. On one hand the singularity of the existing space, with two subterranean dark vaults built in brick, as antique caves or cellars. On the other hand, the proposed venue, a night club that should have the versatility to work as a snack and cocktail bar, where a fast mutation would happen at some point of the night and the general scenery would quickly switch from a warm atmosphere into a lysergic dance floor.

This need for transformation and that kind of clandestine atmosphere made the design team think of a space with a close relation to the mystery where they could not omit the magic and the optical illusions.

The key aspect of the project was the use of two protagonist elements. The mirrors, which were placed on both ends of each vault, produce an optical illusion known as the “endless mirror”. When facing two mirrors, the reflection of one on the other makes the reflected image, the image of the vault, become infinite. These effects make the vaults turn into endless tunnels.

Another highlight is the changing lighting. Therefore, being light and color protagonists to the project. At the axis of the two vaults, two longitudinal dynamic led lamps cast were proposed among the suspended acoustic panels that change speed and color depending on the different scenes at the venue. Also, the drink-bar works as a lamp itself, providing a warm fire toned light that serves as a basis for the playful lights in the surfaces of the vaults.

The architects Oliver Franz Schmidt, Natali Canas del Pozo, and Lucas Echeveste Lacy form EL EQUIPO CREATIVO, a studio based in Barcelona and specialized in the interior design of gastronomic, commercial, brand and hospitality spaces. Since 2010, they have worked for some of the most prestigious chefs in the world, like Ferran and Albert Adrià, and their designs include four Michelin star restaurants. Their projects have been recognized in more than 25 international design awards, for example, Hotel Axel Madrid was nominated for Best Hotel Design Europe at the prestigious International Hotel & Property Awards 2018 and the Las Chicas, Los Chicos y Los Maniquís Restaurant has recently won the FX Awards as Best Restaurant 2018 and the Frame Awards 2019 as Best Use of Colour.

FRAME magazine has featured them among the 20 most influential contemporary designers in the world and in 2017 they have been awarded Firm of the Year at the American Architecture Prize.